Another life: The mysterious and fascinating mycorrhizal fungi forms an intricate underground network 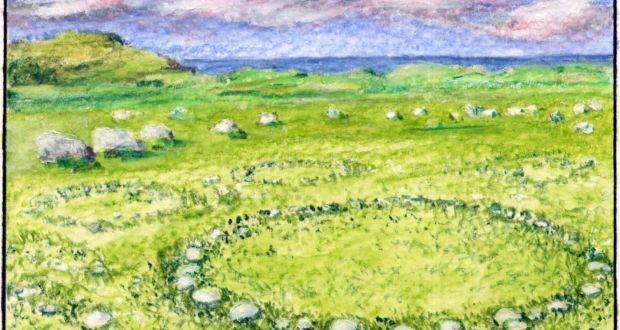 A handful of my garden soil has a cool, silky feel. Most of its particles were ground down from the mountain’s sandstone, gathering clay and ancient plant debris to make a smooth, silty loam. Each new year, the pleasure of handling it surprises me.

Greater Dublin, scene of such a great resurgence in growing back-garden food, sits on a basin of limestone till, which makes the soil alkaline. A glacier added clay and sand on its grinding passage into the sea. Mixed with the humus of ancient vegetation, a brown soil suits vegetable gardeners well – the darker brown the better.

The geology of soil says something of its promise for growth, but nothing of the intricate life that creates it. The first spadeful of spring may tumble out an earthworm or beetle, but these are the big beasts of soil. Its teeming, diverse population reaches into the infinitesimal, so that just one gram of it can contain as many as 10 billion bacterial cells.

Such microorganisms act to provide what humans, imperiously, have taken to calling “ecosystem services”.

For a farming nation, Ireland came late to what has been termed the last frontier of biodiversity research. Unlike some other countries, this century found Ireland lacking in any basic data about soil organisms, apart from specific root pests and diseases.

Such knowledge was essential to sorting out ways of protecting the soil or deciding what best to spread on it.

A project called CréBio, led by UCD scientists in 2005 and funded by the Environmental Protection Agency, explored the soil at 80 fields to survey the whole range of life, from ants and arthropods to nematodes, mites, bacteria and fungi. It found that their biodiversity, not the type of soil, matters most to fertility.

Bacteria and fungi are by far the most abundant. They form food webs that drive nutrient cycling, the storage of carbon and nitrogen, and the purification of water.

The microscopic fungi of soil are far more varied than those that push up mushrooms as fruit to spread their spores. The most mysterious and fascinating are the mycorrhizal fungi that form an intricate underground network of mutual, beneficial connections, including a “Wood Wide Web” that proposes a communal engagement between trees.

The mycorrhizal fungi (the word gets easier) colonise plant roots, sheathing those of trees or growing within the root cells of grasses, vegetables and shrubs. In exchange for carbon from the plant, made from processing sunlight and air, the fungi forage for minerals such as phosphate and nitrogen, essential to plant growth. Some fungi pipe water into tree roots. giving conifers, for example, less need to spread their soil anchorage in forests.

They do this with hyphae, long threads of cells some 50 times finer than the finest roots, that push between stones and soil particles with questing, signalling tips. They are so prolific that: “If these hyphae were ironed into a flat sheet, their combined surface area would cover every inch of dry land on Earth two and a half times over.”

Such calculations come in a book that opens up a whole new understanding of the connections of life on earth. Entangled Life (Bodley Head) by English fungal biologist Merlin Sheldrake, traces the reach of mycorrhizae from the first evolution of land plants to their psychedelic power over the human mind.

Their hyphae preceded plant roots, helping these to emerge onto land. Fungi are also symbiotic partners with algae in the lichens that grow on rocks and churchyard tombstones, and use acids to break their surfaces and mine them for minerals. This gradual “weathering” of rock, says Sheldrake, makes lichens a geological force.

The author is a son of Rupert Sheldrake, a researcher in the field of parapsychology whose books since 1981 have stirred much scientific ill temper. They propose forms of inherited memory in nature that come close to expression as telepathy. As Merlin’s book engages with “magic” mushrooms, psychedelic adventures and fungal enthusiasts in west coast America, the reader might grow a little anxious.

In fact, he reports it all well and most absorbingly. “Going fungal” may have had its origins in psychedelic experiments, but the Radical Mycology movement and the rapid spread of amateur mushroom growing and start-up enterprise is taking fungi into quite new realms of human service.

Cultivated fungal mycelium is tough enough to serve in place of leather, make construction panelling and degradable packaging. Dell computers, reports Sheldrake, ship their servers in mycelium, which can be composted at the end of its life. Living fungus running through sawdust is making lightweight bricks and insulation.

Entangled Life is a book of scholarly revelation, often beautifully written. It has left me much better equipped to appreciate the secret life in my handful of garden soil – and Earth’s unguessable connections between the things that grow.